I recently happened across the following TED talk by Dan Meyer, discussing the role of digital media in his maths classes. I was pretty inspired by how he uses film to motivate pupils and improve their problem solving skills.

It got me thinking about how I could use digital media with my own pupils to enthuse them about problem solving.

Some of the things that have really worked have been using tellagami to pose children problems. This has proven really useful for things such as shape puzzles as you can have the image in the background whilst the character describes the puzzle that the children need to solve.

Puppet Pals has been another great app. At a recent RTC session we looked through the ‘More Able challenges’ booklet that the government released many, many, many years ago and converted them into little mini movies that could be shown to the children. This can be done so quickly and easily and suddenly brings a rather bland and static problem to life. 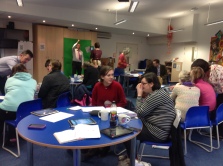 Similarly using DOINK Green Screen we recreated several puzzles. Again, this is such a great way to get the pupils excited and talking about problem solving. It’s also such a great medium to get them excited about creating their own problems and puzzles for others to solve.

Finally I’ve recently been won over by Adobe Voice – which is such an easy app to use but produces such a professional looking end result with minimum work. It’s a great way to get the children to explain how they solved a puzzle. It challenges them to, in a concise and succinct way, articulate the methods they used – which is not an easy thing to do!

Children live in such a media rich environment now that we constantly need to re-evaluate the ways we deliver things to them.  As I said, Dan Meyers talk was pretty inspiring and I’d certainly say it’s transformed the way I approach getting the children to talk about Maths.

One thought on “Digital movies to engage pupils in maths”